If you click on a link on this page and make a purchase, we may receive a small commission at no extra cost to you.

Welcome to yet another rerun. Another “innovative” product that makes brushing easier and fun. No, it’s not designed for kids, it’s made for adults. The 360 toothbrush takes laziness to a whole new level – is it a good idea or significant step back for dental health? 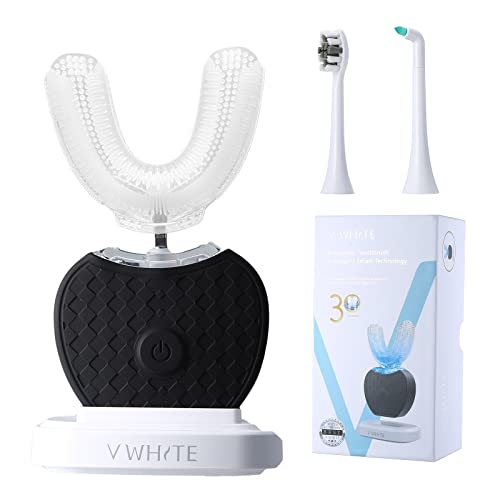 Check out our list of best electric toothbrushes for kids, if that’s what you are in the market for.

360 toothbrushes are also known as mouthpiece toothbrushes or mouth guard toothbrushes thanks to the shape and design. Like a mouthguard you’d need for football, the u-shaped brush covers all your teeth at once with many bristles. The idea is to save time and keep your hands free. Instead of brushing in motions, focusing on cleaning tooth by tooth, you’re cleaning everything at once.

At first glance, this sounds great! A deep clean without the effort? Yes, please. It continues to sound great as you read through the specs until you reach “This toothbrush is used for micro cleaning and teeth whitening, not to replace your daily brushing but to compliment for a deeper clean.” A similar statement can be found in various models. It’s most likely just companies trying to cover their asses as they don’t yet have any FDA approval or testing to confirm how well the product use. But it does make you wonder… is it maybe because they just don’t work?

Regardless, in an attempt to make brushing easier and save time, many 360 toothbrushes double your cleaning time because they can’t be used alone.

Dr. Chhya Chauhan told the Financial Times “The technology is good, but the clinical trials aren’t there and although they look great, it’s not clear whether they remove plaque.” And honestly, we think she was being generous with that statement.

The technology isn’t that great, based on customer experiences we’ve researched and have taken a closer look at some of the companies developing these devices. Now, if a brand like Colgate or Philips decided to create a 360 toothbrush this might be a different story. With a reputable brand, clear research and tests, we could buy into this idea.

Until the big boys jump on the bandwagon, your choice in the mouthpiece toothbrush market is limited.

So, is it worth getting one?

Should You Use One?

Let’s pro-con this toothbrush into the ground. Deciding if you should use one or not mostly comes down to 2 things – will it improve your dental health above your usual routine, and is saving a few minutes every day so important that you’ll spend money on a device?

Advantages of a 360 Toothbrush

The advantages here are like an add-on. It’s not the main course, it’s dessert. A good brush with a sonic or oscillating toothbrush does most of the work, while your 360 toothbrush adds some whitening and catches anything you missed.

Combined with mouthwash, flossing, and brushing, a 360 toothbrush adds another layer of dental cleansing. It’s when the mouthpiece is used alone that worries start to pop up.

Disadvantages of a 360 Toothbrush

Personally, I’m going to admit here and now that I think the whole concept is baloney. Even if I could use the mouthguard toothbrush without regular brushing, I’d spend those few minutes twiddling my thumbs in the bathroom. Honestly, will you genuinely utilize the few minutes that this toothbrush saves? Will you make an omelet? Start the next great American novel? No, probably not. If you don’t just stand there letting it work away while your mind drifts back to bed, you’ll be catching up on Family Guy or cleaning up the mess it makes. Highly productive.

Rant over. As a Dental Dork, it’s my dental duty to look at the advantages as well as the disadvantages. Wasted time aside, the concept could be good. For those people that have so little patience and tolerance to brush for 4 minutes a day, this could be a good alternative. At the very least, it might prevent people from skipping brushing altogether.

Comparing a 360 Toothbrush with A Regular Electric Toothbrush

A regular electric toothbrush gives you control. It allows you to micromanage those pearly whites and pay attention to where plaque may be building up or food may be stuck. It puts you in control of your dental health. Yes, you must stand there moving your arm about and reaching – is that such a hardship? I can see how this could be a problem for arthritic people or any condition that impairs the ability to grip and flex the hands, so in that circumstance, I can see the appeal of a device that does it all for you. And yet, there are water flossers and brushes designed with these problems in mind already.

To summarize, for a small number of minutes and an even smaller amount of effort, you can proficiently care for your dental health with any one of our best electric toothbrushes.

In comparison, a 360 toothbrush takes control. You need to put your trust into the toothbrush and feel confident that it will give that same level of care and attention that you would to every tooth. It’s faster and probably more efficient, especially on the top, fronts, and backs of your teeth where the brush is pressed to them. But in between your teeth? Probably not. It also isn’t smart enough to alert you to stubborn food it can’t work out or potential cavities and plaque build-up. If you do use a 360 toothbrush instead of a regular electric toothbrush, we’d recommend at the very least that you examine your teeth afterward while you floss to make sure nothing has been missed.

To summarize, a 360 toothbrush saves you time and effort, but it could be at the expense of your dental health if you don’t stay diligent. You might be able to save physical energy by not moving your hand around, but you’re still responsible for examining your teeth and ensuring they stay healthy.

It’s an odd sensation but one that won’t be completely unfamiliar for those that have had braces or worn a mouthguard for sports. It won’t choke you or cause discomfort unless it’s too big for your mouth. Most mouthpiece toothbrushes are one-size-fits-all so if it doesn’t fit, you’re out of luck.

Our mouths do feel clean when we use the device, but closer inspection reveals areas that aren’t well brushed and need extra attention.

Using a 360 toothbrush is simple:

Various models have slightly different methods – some come with a toothpaste compartment that automatically runs into the brush when you turn it on. Also, be aware that you need to clean and dry the mouthpiece completely before you put it on charge. Unlike a regular toothbrush with one head to rinse under the faucet and shake dry, you have a whole forest of bristles to clean out.

It is easier to use and yes, it is kind of fun. It might also do a better job of whitening your teeth as the bristles are in contact with the surfaces of your teeth for longer. But as for reach plaque and cleaning those hard to reach places, it falls short.

What to Expect from a 360 Toothbrush

Expect a fun device that you might use for a week or two and show off to friends. Don’t expect this toothbrush to replace your regular dental routine and don’t rely on it. It just doesn’t have the reach, power, and intelligence to do the job well enough.

That being said, we aren’t ruling out the 360 toothbrushes entirely. In the short term, the current devices on the market can help to whiten your teeth and encourage those that skip brushing to at least give it a go. In the long term, we hope research into the potential of these devices will encourage a big-name brand to create one that’s genuinely effective. Watch this space…

Peter is a dental hygienist in the city of Chicago, IL. In his free time he likes to write blogs and product reviews on anything dental health related.

We try to make dentistry fun. Not while you are on the dental chair, holding onto dear life, but when you are on your chair at home, or at work.

Most people try to avoid dentists and hygienists as much as possible. Even though dental health is important, it does not have to be painful and costly.

Hopefully this blog can help you learn about dental hygiene, help you find reasonably priced methods and products to maintain your dental health, and help you learn a thing or two.